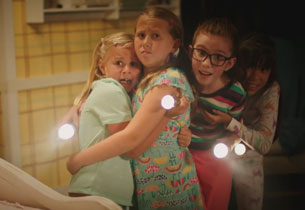 Alberto Belli is the Prince of Spoof and was winner of the web film category with his hugely popular spot for HBO. Here we catch up with the LA-based director on what he’s been up to since his win in Cannes.

Getting the chance to work with various companies around the US to create many minutes of fun content.

Great filmmaking only comes from all the departments telling the same story with the same passion.

“A director must be a policeman, a midwife, a psychoanalyst, a sycophant and a bastard.” – Billy Wilder

The whole production had to work together to handle a kid who was the most charming kid on camera but was really imperative and hard to manage on set. The spot was a musical, so he was wearing a teddy bear costume, which made everything even harder.

Directing my first feature for a major studio in Hollywood or direct a Super Bowl ad!

List five of your favorite films from the past year –  these can be long or short formats.

Whiplash
Nightcrawler
Guardians of the Galaxy
The Imitation Game
Dawn of the Planet of the Apes.