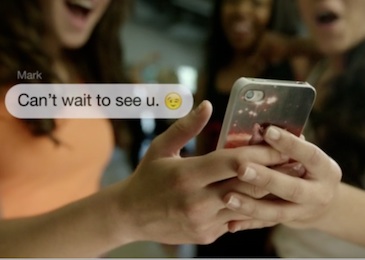 We catch up with Jingyi Shao who won First Prize in the Film School US category with your film Text History of Jane.

Was there a set brief given to you at USC – how did the script come about?

I created the spot for a music video/commercial class at USC.  The guidelines were simply to make a 60 sec PSA or 30 sec spot.  I always thought PSAs allowed for darker, more introspective storytelling than commercials so I immediately decided to do a PSA.  At the same time, I always wanted to tell a story with only texts.  I think you can tell a lot about a person from just their text history – their relationships, how they express themselves, moments in their life etc.  So I put two and two together and I had Text History of Jane.

We never see anyone’s face in the film which I felt was the right choice but at the same time scary to me.  So designing each scene to be as expressive as possible without showing faces, which typically express the most, was the biggest challenge.

I was lucky enough to have representation with Untitled in US before my YDA but I definitely feel some kind of effect.  If anything, this PSA is my most personal work so for it to be recognized pushes me to continue to be more personal in all my work.

So please tell us about J+J – Jing 1 and Jing 2. A quick potted history to how you joined forces to direct please…

We were both young filmmakers in Shanghai and we met on set!  Jess was working as a director at a TV station while I was scrapping on set as an AD.  We had a lot in common and we both loved filmmaking and we actually started dating first!  Eventually, we both shifted towards commercial filmmaking and we would work in different capacities for each other.  If I directed, she would edit, if she directed I would shoot.  We got some notoriety that way and when we moved onto larger projects we formed j+j, a directing duo.  I actually proposed at Cannes this year so I guess we’re joining forces permanently!

You have one music video in your portfolio, for Son Lux, Ransom. It’s a great story, please tell us about it, how it came about, who wrote it and how was the production process?

Ransom was a project also done for that same class at USC.  Jess and I wrote and directed it together though many of the ideas came very immediately from the music, which is just incredible.  Son Lux is a wonderful band and doing Ransom was a truly inspiring experience.  The song itself has a lot of physicality, struggle and emotional build which really lent itself to boxing imagery while the singer gives it a feminine quality.  We really couldn’t imagine any other character other than a female boxer.  The idea of being held for ransom emotionally inspired the family background of the boxer and the idea of what you hate shaping you into who you are is an idea that always has interested us.

Since the project was done on spec the production process was a nightmare, especially securing locations and talent.  Even though there were two of us we definitely got stretched thin and we didn’t quite have the time to do some things we wanted to do.  All that said, it was absolutely worth it as I think this project was one of the most rewarding projects we’ve ever done.  You don’t always feel an immediate self-improvement project to project but we definitely learned a ton doing this project and we feel we took a big step forward.

“The more opinions you have, the less you see” – Wim Wenders

Spending three weeks to cast a Korean grandma and having her quit the day before the shoot.

Minimalist thriller about a bodyguard vs an assassin in a game of cat and mouse, staring Ryan Gosling as bodyguard and Tom Hardy as assassin.  Neither says a word of dialogue until the very end.

This year it’s been music videos for me! Daniel Wolfe’s “Iron Sky” for Paolo Nutini, Fleur and Manu’s “Pursuit” for Gesaffelstein, Truman and Cooper’s “Hell Yeah” for Rag N Bone man.  I just watched a Theater adaptation of 1984 at the Playhouse in London which was absolutely incredible.  Lastly, I recently camped out in Joshua Tree with some friends.  We listened to Nils Frahm while staring up at the universe.  Nothing is more inspiring than that!