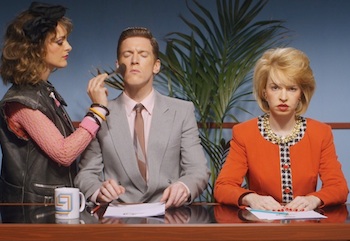 Soon after being nominated for a Young Director’s Award, Jack Whiteley was signed to London top production company Rattling Stick. Now the new director has come up with a fabulously funny parody of a newsroom drama.

Your video for The Staves’ Black and White is, thank goodness, shot in glorious colour. It’s styled in a pared-back 80’s way with a lot of attention to detail – along with the hair dos and wardrobe, we also love the cigar and the Channel 9 letterhead and mug for instance. Please tell us about the process that transported The Staves’ lyrics into an Australian TV newsroom.

The Staves originally had an idea to do a Catchphrase take off. I liked the idea of doing something based on TV but I felt a Catchphrase parody didn’t have the emotional gravitas that the song required. I then got thinking about other TV shows we could parody, which eventually led me to TV news. That’s when I remembered a clip I’d seen on YouTube of a female news reporter insulting her male colleague live on air: http://youtu.be/xZYjIfKyinU.

The clip immediately got me wondering what was going on behind the scenes with these two characters and that’s when the idea of a TV news couple having a relationship breakdown live on air was born. I felt the idea worked well with the song’s title being a metaphor for contrast, the contrast being in the characters on air/off air personalities. It allowed us to incorporate some old 4:3 TV footage, something The Staves specifically said they wanted to include.

The idea behind setting it in 1980s Australia was simply to create a fun and colourful alternative reality in which the more serious drama could play out. I worked closely with our production designers Gini Godwin and Sophia Stocco to create an authentic (if somewhat heightened) TV news channel, which I named Channel 9 News. Soph did a fantastic job on designing the logo, which was based loosely on the old colourful Channel 4 logo from the eighties. I also had the privilege of working with the brilliant costume designer Rebecca Hale who was happy to create some classic eighties looks, a decade she said she knew all too well.

I drew on a range of filmic influences from the Anchorman films (on screen couple dynamic) and To Die For (Jess’s weathergirl character) to Magnolia (camera movements) and Annie Hall (style of humour).

What other ideas did you shelve?

At one point I had the idea of doing a parody of Blind Date with The Staves’ girls playing the three contestants. I wanted to base the male suitor on the American comedian Kyle Mooney (http://youtu.be/OpF9moIJfYM) who I’ve recently discovered. He has a brilliant awkwardness that could have worked really well, especially during the big reveal moment when I imagined an incredibly uncomfortable scene as The Staves girl breaks down crying, forcing the cameras to cut. Ultimately, we decided to pass on the idea because it was potentially too comedic and The Staves didn’t want such central roles.

Was it a challenge timing the visuals to the track?

I nearly always time my music videos precisely with the music. I just feel they have more impact when the music and visuals are really locked in and working together. One of the things I instantly loved about the track was the dynamic shift between the verses and choruses. The verses are much softer, striped back, almost a cappella, where as the choruses are much louder and explosive. Structurally, it quickly became obvious that the moments when Scott and Patricia were on air would be during the verses and the moments when they’re off air and arguing would be during the choruses and so it was just a case of timing things to make sure they fit.

Great performances – how did you go about directing the cast? Did you have time for thorough rehearsing?

Casting and working with the actors was one of the things I enjoyed most on this project. We worked with a great casting director called Lucy Rands. Having said that our female lead, Nell Mooney, was actually recommended to me by a colleague. She was absolutely perfect for the role as she could balance the on screen/off screen spilt personality aspect of her character effortlessly which was critical to the video’s success. She’s also brilliant at improvisation (as most of the dialogue was improvised) and had the crew in stiches when we were filming on set.

Sadly we didn’t have the time or budget to do proper rehearsals so we factored it in to the casting process. When we did the call backs I paired Nell up with two or three different actors to find which pairing had the best chemistry then once I’d chosen we just all talked about who we thought these characters were and what the history of their relationship might be. Also like I said Nell was brilliant at improvisation so Luke (who played Scott) was able to bounce off her a lot on set.

Ok so it can’t be Sydney. Where did you shoot it?

We shot it at Camden Studios here in London but in my head it’s shot at Channel 9 Studios, Perth, Western Australia, circa 1986.

From assisting at Rattling Stick you’ve now got directing status. What have been the key lessons you’ve learnt about film making since joining RS?

I was actually lucky enough to go straight into directing at Rattling Stick (having never worked with them before) about 18 months ago. It’s been a big change for me as before that I was working independently in Liverpool on low-budget productions doing everything myself. So it’s been a huge learning curve and it’s taken a bit of time to get used to how the industry works and the process of pitching and writing treatments, learning about brands and ad agencies, working with crews, budgets and tight time constraints. Before I could take a whole week to shoot something if I wanted to but now I generally only get one day. But it’s brilliant; it’s teaching me to be more disciplined and to plan and rehearse a lot more. It’s been a great adventure and I’m only just getting started – I’m excited to see where this year takes me!

I’d just like to say a massive thank you to everyone involved, all the different departments, from casting and costume, to production design and cinematography – everyone really got behind the video and did a fantastic job. But most of all I’d like to give a special shout out to everyone at Absolute Post who really went out of their way to help us on this one!