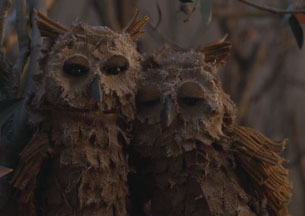 We catch up with director Joseph Mann, recently signed to Blink, about his winning music video, Small Hands for Keaton Henson.

What came first – your desire to craft creatures or to make films?

Making things is what I have always enjoyed doing. I was never any good at academic structure and it used to really frustrate me. I found I was able to escape the grating system of exams and essays during my school years by just making things. I have always loved creative writing so that has always accompanied anything I make. I begin everything I make with a few sentences – it helps steer my creative process and stops me wobbling off in weird directions.

Do you actually make the models too – how did your love for model-making evolve?

It depends on the project but yes, I always get involved with all the model-making. It’s a very important part of what I do. I can remember making all kinds of models when I was really young; I used to paint weird insects on pebbles with my mum. My grandfather used to make the most incredible models of the vicarages that the family lived in. Everything was scaled down perfectly and each floor lifts out individually, they are quite something.

Have you always been telling stories?

Yes. I love to make stuff up. My sister and I used to pretend we could speak Spanish together. We would try to trick our friends, it must have sounded terrible.

Where did you learn the skills of filming and lighting?

I guess when I was at Glasgow School of Art where I first started using cameras to create films. I lived in an empty cupboard with a few photography lights for most of my final year. It was far from anything fancy but I guess it taught me how to improvise. As long as it looks good on screen who cares what the set up looks like? I still enjoy working this way ¬– I am lucky enough now to be surrounded by talented cameramen so I don’t have to worry so much any more.

What part of the process do you like the best?

The creative writing part in the beginning gives me huge satisfaction. Seeing things coming together in camera is always a magical feeling.

So what led you to Blink?

I loved the kind of work they were creating. I enjoyed getting involved in projects wherever I could. I quickly realised that it was the creative environment here at Blink that gave it its spark. It’s a building filled with talented and fascinating individuals – who wouldn’t want to be here?

Did you work closely with Keaton Henson to develop the narration and style of the video for Small Hands, or were you given free creative reign? What were the considerations you had to think about in pre-production?

Working with Keaton was very collaborative from the word go. We bounced a few things around and agreed on creating something set in the woods. He did a few drawings and we set off full steam ahead into the forest. From there I came up with the idea to ‘make, then break’ three animal couples relationships in half. It felt right for the song and I have always loved owls and underground burrows so it felt good. I was given completely free creative reign. My main issue to consider was getting everything built and shot in four weeks without having to compromise all the small interesting details that I always try to build into my work.

You worked with other artists creating the models – how does that process work?

Jonny and Will made all the puppets in their studio. My brief to them was just cobble the animals together from whatever you have lying around. With help from Keaton they designed all the characters themselves. They built them all in two weeks. I built six sets with a small team of modelmakers all at Clapham Road Studios. This is also where we shot the video. We also had two weeks to put these together with whatever we could find. I used dead wood from Hampstead Heath. The Heath was my inspiration and it’s where I created the idea for the video. They have woodpeckers on the Heath! The noise they make is so beautiful – the sound is at the start of the video!

What were your initial thoughts about the style and narration of Small Hands and did you actualize these?

I wanted it to all look as physical and tactile as possible. I wanted to use everyday materials, no fancy stuff from model shops. It was all just thrown together with a bit of paint and plasticine. All the leaves are made from paper to take it away from looking too realistic and they limited the colour pallet slightly too which was important to create a slightly fantastical world.

What were the main challenges of creating Small Hands?

Getting it done in time. The process of the shoot was Jonny, Will and I trying to get the performance of the characters in as few takes as possible. The two of them have been doing it for years so they made my life very easy as everything they did looked amazing. They spent all their time under the set getting dripped on-not to mention the amount of soil that landed in their laps.

And was it a very different process to making Peugeot or TiE which involved paper engineering?

Yep, very different. A much more free way of working. You can’t make a mess with paper engineering so it was really refreshing to be able to throw soil and mud all over the place. We made so much mess it was seriously fun. We used a paddling pool for the frogs’ lily pond, which could have been a disaster as we were surrounded by cables and cameras – part of the fun tho right?

What are the key lessons you’ve learnt from making these commercials and now your first music video?

Blimey big question. For me now I feel I have learnt about solving problems with out compromise. I guess if you can overcome any issue with a solution that’s actually going to be better than the original idea then you’re onto a winner.

What’s the wisest advice anyone has given you about filmmaking?