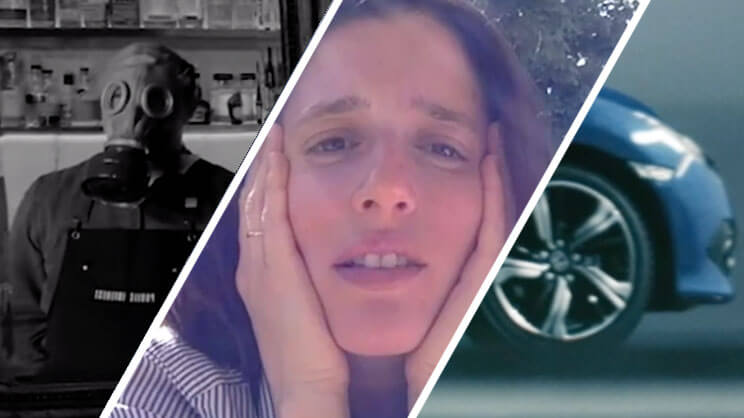 We’ve had so many great submissions in the first week for Creation in Isolation that we have picked a few more favourites..

Maxmilian is a Prague based Commercial Director. He grew up on the streets of New York where through being chased by bodyguards off of marble pavements making skateboarding videos he realised that his future was in film making. Film sets seemed to be a safer option so from a young age he started dreaming up ideas. Maxmilian moved back to Europe and attended the University of Westminster in London studying film. Being in the industry since a very raw teenage age, he loves working on projects that push the boundaries of our everyday stereotypes through authentic forms of story telling & innovative visual style. When not working he takes time off skateboarding, chillin maxin relaxing sipping on some gin & tonic.

Eirini Vianelli is a director / animator based in Athens Greece. Her films have screened in international film festivals including SFFILM, Oberhausen, Sarajevo, Edinburgh and more.

Born and raised in the UK, Amin started working in a Video Shop in Notting Hill Gate doing research for Agencies and PHs, working his way up to become a runner then a 3rd assistant director on feature films like Wimbledon, Nanny McPhee, and Charlie and the Chocolate Factory to name a few, he moved from there to the states for 4 years working his way up to 1st AD and then producer. Amin moved to Dubai in late 2007 and freelanced as a 1st AD and Producer before moving to Y&R as a producer then head of production for 4 yrs before moving to Ogilvy and winning Agency and Network of the year in his first year. He took a couple of years off to travel and do Ironman races and is now back at Ogilvy as head of production.

Well done to everyone who has sent in a film.
Stay tuned for more favourites in the coming weeks!