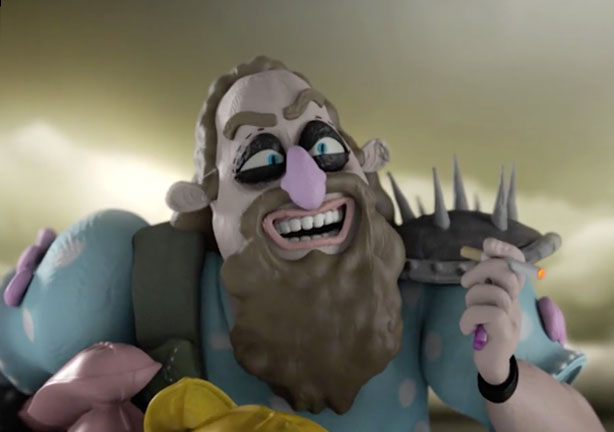 Sam Southward’s brilliant, post-apocalyptic animated film, After the End, won gold at the YDA in 2016. Here, he talks to us about how the film came together and what the win meant.

You picked up a First Prize in the European Short Film category at the YDA in 2016; what do you remember most about that year’s ceremony and your success at it?

It was incredibly exciting finding out I’d won the award and I was so proud of my amazing team. I sent round a very excited email congratulating everyone and we all met for a drink a few days later.

How hopeful were you that After the End, might come out of the YDA with some form of recognition?

It’s funny looking back on it now but one of my main aims when making the film was to create something that would make my mates laugh when I showed it to them. So, for the film to have gone on and had such an amazing global festival run, with the crowning achievement winning the YDA, it still seems pretty surreal. Also, as a bonus, it did make my friends laugh when they saw it, and they are some of the most miserable people I know.

“I think I would first suggest that maybe they consider selling their non-vital organs to medical science as it it is more lucrative and possibly less painful than animation.”

Where did the idea for After the End come from and how long did it take you to make?

After the End is my grad film from the National Film and Television School, and in total it took just over a year to produce. I had wanted to do something post-apocalyptic for some time as I love the visuals you can create in a destroyed world, but also feel it can be used as an interesting lens to talk about our own time. I love comedy and find it such a great way to write as when it is done well it provokes such a positive reaction from the audience but can also deliver a strong message.

At the time I began writing it, there hadn’t really been a humorous take on life after some kind of apocalyptic event, so I used this as the starting point. Without being too specific, I decided to have our apocalypse brought about by mankind itself, the film’s story then becomes a microcosm of the destruction of mankind ironically repeating itself again, with no lessons learned.

Thematically the film was first about snobbery and the clash of cultures. Dolly was originally just a prop in the story, but then became a character as the story world continued to grow and develop.

Winning the YDA was great exposure for me personally as well as for the the rest of my team. I remember at the time going into meetings and clients mentioning it, which is obviously a great way to start a meeting.

To me telling stories and making films is my way of speaking back to the world, before this I use to shout at people on buses and trains but I found a lot more people listen if you do it through a screen.

Properly curated awards, like the YDA, are great because they give a moment to stop and really appreciate good work and new talent and ideas.

What was it that first got you interested in animation?

Growing up in the 80s I loved cartoons and comics and always felt the need to tell stories, but was resistant to the idea of becoming an animator as I thought I wouldn’t have the patience to draw the same thing over and over again. I began to experiment making little films and loved, finally, having an outlet for my stories.

But it was when 3D computer animation packages first became available for home computers that I had my eureka moment. I suddenly realised that I could literally create anything I wanted inside these programs and had complete control and freedom. The irony is that I had originally experimented with 3D naively thinking it would be a quicker than traditional animation, but when you get down to it, it is easily as intense and time-consuming as other techniques!

Well, funnily enough, since being signed as a director I have majored on interactive and experimental work, which I think demonstrates a fluid and changing industry where a broader set of skills are in demand. In that sense, and particularly in a company like Nexus Studios, there’s a lot more opportunity for new talent to break through if they have original ideas.

“Let your passion engulf you, spend as much time creating as you can; make work, show people, enter competitions and crucially, make your work for yourself.”

Some of your other work since winning, notably for Google and the Gruffalo app, involves the integration of technology with the animation; is that something you like to play with and does animation lend itself well to technological innovation?

To me, personally, I have never been able to separate technology from animation, it has always been driven by new techniques and inventions from the days of Disney’s multi-plane camera to today’s 3D animation software. I find telling stories through interactive experiences amazingly exciting, they are like little personalised films that I think can build an even greater connection with the audience making something really memorable.

Again, I think its an amazing time to be working in the industry as we now have a new set of tools, with real-time render engines and interactive devices as well as new ways of connecting with our audiences, through mobile, AR and VR which I feel now we are still only just scratching the surface of.

Above: Southward’s After the End

I think competitions are incredibly important, they provide valuable platforms for up-and-coming talent to get noticed. Properly curated awards, like the YDA, are great because they give a moment to stop and really appreciate good work and new talent and ideas.

What advice would you give to any director looking to carve out a career as an animation director?

I think I would first suggest that maybe they consider selling their non-vital organs to medical science as it it is more lucrative and possibly less painful than animation. If after this they still want to do it, and animation is their passion, I would say the best advice is ‘just to do it’ and don’t wait for anyone’s validation or approval.

Today, literally all you need to get started is a laptop and a internet connection, all the tools you need you can download. Let your passion engulf you, spend as much time creating as you can; make work, show people, enter competitions and crucially, make your work for yourself and make sure you are having fun, then the career part should follow.

Above: Southward’s After the End

I always stay busy whether I am in the middle of a big production or have some down time. I am always pitching on interesting projects big and small but also have some larger, slow-burning projects. I have written two animated series ideas that are in the process of being pitched, I also plan to hopefully make another short this year, but this time live-action and I also have a children’s book that I am slowly writing.