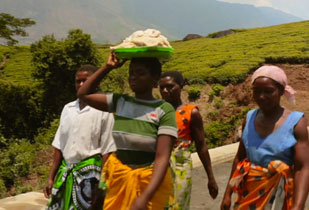 Will Robson-Scott won 2nd prize last year in our short film category with his Chi Raq documentary shot in Chicago. We catch up with the new director about his film just show in Malawi

What have been your highlights since winning at the YDA show in Cannes six months ago?
The highlight since winning the YDA was shooting ‘Fairtrade Matters’ with my production company HLA, in Southern Malawi at the end of 2014, the films are now live online. It’s a story of the people behind the products we consume, and I hope it makes people consider the choices they make in the shops. The approach was to let the subjects tell their real story, and it was incredibly humbling. The subjects and people we met were very inspiring, and we (who live in the first world) are all spoilt brats.

All the gear, no idea.

Shooting eighteen hour days in Malawi was challenging, we wanted to capture action at sunrise and sunset every day for a week as the sun gets so harsh in the middle of the day. It’s hot and very dusty, and we managed to blow out a 5D, the monitor on the movi died, and the heat would send the computer controlling the movi haywire. Luckily we had back-ups, thanks to production!

Shooting ‘Chi Raq’ in South Chicago had its own challenges, we had a rendezvous with a well known kid from a notorious part of South Chicago called ‘Dro City’ and as we arrived the block had been closed down by the police. The guy we had come to talk to was getting arrested, I got my camera out but everyone I was with told me not to film. To these kids the police are seen as the most powerful gang in Chicago and the police view the kids in the same way.

I would love to just keep travelling and shooting stuff that engages the audience.
List five of your favourite films from the past year – these can be long or short formats.
Birdman (Amazing camera work).
12 Years a Slave (although I do not think I could watch it again).
All this Mayhem (skateboarding is something very close to my heart and this is an insane doc).
Knuckle (It didn’t come out this year, but you couldn’t make up the characters in it).
Skin by Tom Gould