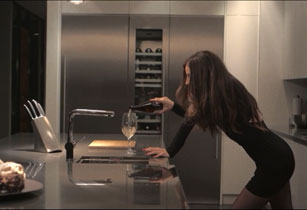 Peter Huang had the audience in fits of laughter at the 2013 Young Director Awards show with his music video, I Could Be The One. Since then the director has gone to create equally stunning films in completely different styles. Take a look, for instance, at his video Sleepless which will have you hiding behind your seats. We catch up with the new director about his busy life since his first prize win….

What have been your highlights since winning at the YDA show in Cannes in 2013?

I’ve really developed a good niche for narratively-focused music video work, it’s given me quite a bit of creative freedom when it comes to treatment writing.

Also, a feature film I co-wrote with some friends years ago got made by Sony (then buried in straight-to-DVD/onDemand). Still, it was fantastic getting that first feature credit. In a way, it feels like something I’ve worked my whole life towards.


What’s the best film making lesson you’ve learnt?
Separate yourself from how you think the final product will be received. Everything you make is actually part of a longer journey where you’re constantly learning and improving.

What is the wisest quote about film making?
“How do you eat a whale? One bite at a time.”

Your worst nightmare production story was when….
In film school, we asked a whole bunch of friends and randoms to be extras in a college lecture scene. Some people said yes, some people said maybe. Come shoot day – 9 AM on a Saturday morning – nobody showed up except for our two lead actors. A lot of lessons were learned that day. Now I do extensive prep and (knock on wood) nothing too crazy has happened in the last couple years.

What would be your dream directing job next year?
I’m in the middle of rewriting a script about a group of young thieves. It’s extremely nihilistic and filled with narcissistic characters, but at it’s core, it’s really a portrait of this current generation and how they grew up with this constant need to prove themselves (via social media). Tonally, it really channels the influences like Trainspotting and Fight Club. I would love to get it made at some point in the next year.


List five of your favorite films from the past year – these can be long or short formats.
It’s not a film but I loved the TV series The Affair. That’s my favourite narrative piece to come out this last year. Film-wise, maybe a bit obvious with my choices, but I loved Birdman, Interstellar, Gone Girl… and I really, really loved The Hunt (I think it was year before though?).