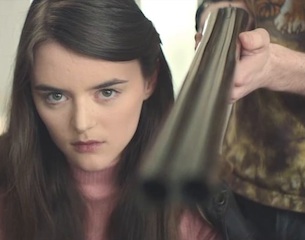 David Bertram won First Prize with his film Don’t Sing for Data in the music video category. We catch up with the photographer-turned-director about his work…

What were the main challenges of making your award-winning film?

As the script is quiet complex, my major concern was to make it simple and understandable. There are five characters that you can all see in their everyday lives and in their neighbour’s fantasy. The main challenge was to be able to recognize them from a sequence to another without being too demonstrative. A second one was to make sure everyone catches the revelation during the car crash.

What impact do you feel winning at the YDA has had? Are you already represented?

I guess this YDA is bringing me opportunities that only a well-stocked reel would do. I was already represented by Standard/Iconoclast when I shot this video, but it was our first collaboration.

I’ve always wanted to direct but after art school I got the opportunity to work as a creative in a very good advertising agency in Paris. At first, I thought advertising would be a great film school, but, even if it was more than formative, I quickly realized that there is nothing compared to shoot a film of your own, with your own little means. That’s what I’ve done, several times, on the fringe of my work.

To accept that things can’t work exactly as what you have in mind, to deal with it, and to adapt because it can always become better.

Probably one from Kubrick : “Perhaps it sounds ridiculous but the best thing that young filmmakers should do is to get hold of a camera and some film and make a movie of any kind at all.”

Actually I don’t have any. Yet.

List five inspirations that have connected with you recently:

A book called Le Royaume (The Kingdom) from French author and scriptwriter Emmanuel Carrère. It is about religion and faith, which are subjects that really fascinate me.

Reality, a Matteo Garrone film, that is one of the best films I’ve seen recently.

The Three Little Pigs from Walt Disney. Even if there is a clearly anti semitic sequence that I can not stand, this really is a masterpiece in terms of music for the image. I still wonder how they did it.

Speaking of music, the opening of Richard Wagner’s Lohengrin left a powerful mark on me. I am a big fan of classical music, yet just discovering Wagner.

Finally, I’ll probably say all the modern music tracks I receive as a music video director. I’ve somehow lost contact with the modern indy music of the past 10 years, so these new sounds I hear fascinate me as it would for a caveman.