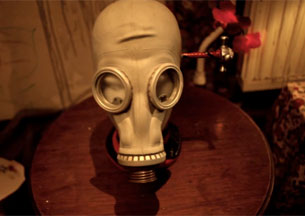 Gas masks, zombie cheerleaders, and hallucinatory paranoia – sounds like an average Saturday night round our way. But then again, round our way is a scary, scary place. Dan Gibling’s disconcerting promo Evacuate for band Primal Device combines great location (the crumbling Shoreditch Magistrates Court in London) with some chosen props and crafty filming techniques to produce the stuff of nightmares. Well done that man. We caught up with Gibling to find out how he created this eery escape story and to chat about the joys of bodyrigs and bendy lenses.
How did you first develop the idea for the Evacuate video?
When the band first approached me with the track, I fell in love with it couldn’t stop listening to it which is always a good sign! It had a very cinematic structure in the way it was layered and created a dynamic atmosphere with the off-kilter anxious sounding verses, the eery haunting build up’s and full throttle kick-in’s … these were really the basis of the narrative arc and formed the key beats on which I wrote the story.
The rest came from the lyrics – to open on the lyric “Hawaiian Baby Woodrose (a strange drug the lads once smoked!), has taken all our senses and turned them into nightmares” – is a bit of a gem for a director looking for a visual theme and so I ran with that. The more I listened to the song the more I saw this man experiencing different forms of paranoia and fear whilst trying to evacuate this labyrinth of horrific experiences…the rest was just a matter of matching various ideas to the feel of each section of the song.
It was obvious that I needed to feature some performance as well as the band are so good at rocking out, so I tried to tie them into the story by having them perform on the sets and bringing them into the narrative at the end, when our hero finally evacuates the building.

I love the creepy gasmask motif – well, when I say ‘love’ i mean I will be having
nightmares – I’m guessing that came from the ‘Evacuate’ song title…  what other inspirations did you have?

I loved the idea of introducing a personified manifestation of the heros paranoia in a form that would terrify, but I didn’t want to use another human face, so the notion of masked men chasing him came in. It was very tricky not to end up too cliche as the horror genre has pretty much plundered the masked evil guy range, as well as bands like Slipknot popularising the theme, but the song title invoked the imagery of wartime evacuation and gas masks and this brought me back to one of my favourite films Dead Man’s Shoes and the russian gas-mask that Paddy Considine’s character uses to terrorise the drug dealers. Its a very unsettling looking object and was typically terrifying enough without being overused in film so I went on eBay and found them to be very easy to come by – they are big in the fetish scene apparently!
I then discovered a reference photo of a tap with the word fear on it which I liked the idea of and so developed the idea of the hero discovering this mask and turning the tap to unleash a flood of fear and the paranoid apparitions

What were the biggest challenges with the shoot?
The shoot was the most complex I have done to date and the sheer amount of shots I needed to tell the story, given that I had written scenes specific to each section of the song and which needed to be shot else I would have big narrative gaps, made for a lot more pressure than usual.
We were very lucky to get the fantastic location we did and following a recce I re-wrote a lot of the story around the amazing pre-existing horror sets that were there. But the biggest draw back the location provided was the lack of electricity, and so we had to cable from a generator through a maze of corridors to each set we planned to shoot on. I think there were 10 sets in the end, all providing their own logistical difficulties and coupled with the fact that it was pitch black in most of the building unless lit, a lot of the time the crew were wondering around with torches getting freaked out by the locations spookyness!
But thanks to a seriously amazing crew who were all working for free, every time I finished filming on one set, the next set was pre-dressed and lit in spite of minimal pre-production meetings, and this enabled us to run around the building shooting at break neck speed. We were also fortunate enough to have 3 DSLR cameras with us which the talented camera team were more than happy to pick up and find me alternative angles on most shots, giving me much more to play with in the edit than I had expected.

One thing we hadn’t planned for was how uncomfortable and scary it would be for a 4 year old to put on one of the rubber gas-masks. There was an uncomfortable half hour lost trying to keep Oscar our kid actor in a happy place as he squeezed his head into this restricting rubber mask and time and time again burst into tears. Thankfully my art director had purchased some kids masks to decorate the children’s room and my cameraman suggested that this might be a good alternative – much to my delight the kid loved playing a scary sheep and this saved the scene!

There’s a real hallucinatory haunted house vibe – and the cinematography really accentuates that feeling of disorientation. how did you go about achieving this?
I had wanted to shoot something with a bodyrig for quite some time since seeing Requiem for a Dream and felt it was the best tool at our disposal for getting inside the heros mind and moving with him and his emotions through his experiences. I also came across the Lensbaby recently which is basically a bendy lens which enables you to distort the image by moving the sweet spot of focus around giving a unique surreal quality to  the photography. I felt the combination of these two camera techniques would provide the tripped out and disorientated imagery and help tell the story of our hero’s state of mind. I had actually planned to shoot more on the Lensbaby and bodyrig than we did in the end, but in the mad rush of the shoot and my focus on getting all the story shot, the surreal nature of the photography took a back seat. In retrospect I would have liked to have experimented in making the photography and the narrative more surreal and extreme in this respect.

How would you characterise your directing style?
Although I am very much into experimenting with different styles at the moment (there are so many genres and techniques I want to try my hand at) in regards to music promos I certainly like to tell a story or have a visual theme that compliments the music and endeavors to go beyond just depicting coolness. Music video has the potential to be such a rich medium and as such I like those promos that engage the viewer with some depth and show how the visuals can enhance the audible experience, not just depict it.
It seems my ideas are often quite structured and although I would love to experiment with more abstract and conceptual themes, I reckon my style probably sits in the more traditional cinematic filmmaking school of a strong filmic look and linear narratives. I have a great passion for cinematography and am always looking for different camera techniques to provide texture for a theme, as well as looking for new exciting ways to shoot performance.

What first drew you to filmmaking?
I played in a rock band for years which gave me a great sense of worth in creating music from nothing and collaborating with other people to make something. When I came across film I felt I had stumbled into a different version of the same process, albeit one that seemed richer and with more layers than just the audible. I had never really played with visual art until I picked up a camera, but the idea of trying to put images to the feeling that music gives me is incredibly addictive! I found that doing music videos for bands was a great way to learn the craft of directing and feel I am just scratching the surface of the different art forms involved in filmmaking….the storytelling, the acting, the production design, the cinematography – its a medium that seems to use all other artistic mediums within it and as such is incredibly rich and engaging.

When you’re not making music videos or films, what do you enjoy doing outside of directing?
Film has become a bit of an all encompassing job and hobby at the moment and when I am not working my day job as an assistant director, I am usually planning, shooting or editing my latest project, so am a bit one tracked really!
That said I used to play guitar and sing in a punk band for years and it seems we are now reforming for a reunion show which will be great! So film and music are my main creative passions, but I also love going to the cinema, traveling and spending time with my girlfriend.

Other than Evacuate, which piece of work are you proudest of and why?
I guess it would have to be the music video I directed last year for acoustic singer songwriter Graham Hulbert. This took the form of a short film set to Grahams song and tells a story of a lonely soul searching the shoreline for something that will bring him back to his lost loved one. This was a very different approach for me, no loud music, no edgy cinematography, no frills or effects, just a static camera and some great acting and the chance to tell a story entirely through images, which is really the basis of the craft of directing.

You can find out more about Dan on his website whttp://www.dangibling.com