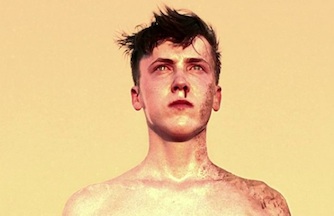 New Zealand new directing duo THUNDERLIPS from Candlelit Pictures headed off to shoot the rising sun in the southern Australian desert for Daniel McBride’s band Sheep, Dog & Wolf. It was meant to be a straight-forward, three-shot sequence of the 19-year old singer running into the blazing dawn light; curling up in fetal position behind a rock gasping for shade; and finally staring into the sun slowly being scorched…

The journey to getting the resultant video Glare, see below, was anything but a walk in the park. Now the directors have made a documentary of the pain, the absurdness, the magic of creating a simple vision that goes horribly wrong. It’s one of our favourite films about film making ever.

Your film, The Sun Hates Me, is self-explanatory so we’re just going to ask a few techie questions please: what were the cameras and lens you used, and what was behind the decision to shoot on film?

A Panavised Canon 800mm stills lens with a doubler and a 1.4x convertor. We used two Arri 435 cameras – the lenses for the second and third shot were Cooke S4s. Film was the only format which could produce a usable image from looking straight at the sun with that amount of magnification. Digital sensors would have blown out, and perhaps even been destroyed.

It’s evident the budget was quite minimal, but how small was it?

We had a budget of NZ$16k but we spent our own money when everything got fucked.

How did you calculate exactly where the sun was going to rise?

By using trigonometry to calculate how many centimeters north the sun would rise, from a mark 90 meters away from the lens. There are many more interesting details about this in the article we wrote about the process that you can read here.

You were all out of your comfort zones and into a sizzling rather cruel environment coping with a series of disappointments. What were the key lessons you learnt?