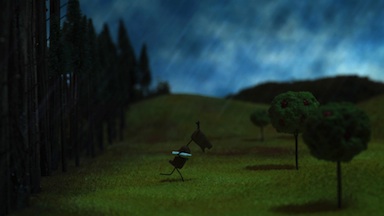 We love a production company who backs its faith in new talent by setting up a new division specifically to nurture young directors. We like it so much that we’re going to dedicate this post to Picasso Pictures which has just launched The Pod soley to develop and introduce their signed new directors  into the commercial playing field.

“We founded The Pod as we receive a lot of graduate reels and come across some incredibly talented artists, so we wanted to create a specific roster where their work would be curated; also this way, clients would be aware that they are new to the commercial world, but have the weight of our production support at Picasso behind them, which will make them a viable option for commercial directing,” said Sam Hope, Picasso Pictures’executive producer.

“We are quite picky though, we look for the new work to be unique, either in its design, technique or direction and ultimately, something that we fall in love with.”

And one of the first directors who The Pod has signed is Peter Vacz who won a special mention at the YDA show in Cannes last month for his stunning graduation film Rabbit & Deer, winning also many other accolades on the festival circuit this year.   The other new directors are Iria Lopez, Steven Lenton and Alex & Remy. Here YDA catches up with each of the directors to find out about their individual styles.

I studied graphic design at the Visual Arts Secondary School in Budapest. I made my first animation there out of fascination, though I didn’t realize at the time how truly magical animation is. I continued my graphic design studies at MOME (Moholy-Nagy University of Arts and Design).

During my second year I designed a puppet with a set for an animated film idea in a workshop. It made me very excited and turned out to be a great inspiration so I switched to the Faculty of Animation immediately and haven’t looked back since. I graduated from a BA in 2010 with Streamschool and MA in 2012 with Rabbit and Deer which so far has won at every festival it’s been screened at since February! I am based in Budapest, Hungary.

Mixing and trying out different animation techniques is one of the main sources of inspiration and innovation for me. The other is storytelling. As for my visual style I love simple yet expressive things, that’s what turns my brain on. I believe that even a triangle can have a big emotional journey… Beside these, playing the cello, doing sports and doing illustration is what loads me up.

When I start developing an idea it always evolves as I keep working on it. I usually have a strong goal in mind of what I’d like to achieve, which helps me a lot in finding my way to the result. I always do storyboard and animatic to have the clearest view before I start the creative process of the production. I mostly worked as a freelancer then I joined Picasso Pictures as a new director, at the start of 2013. From this August also, I’ll be collaborating with a few professional friends (we met on ASF) in a creative workshop in the south of France – this is really exciting news.

I always wanted to be an artist, so I did my BA at the local Fine Art school in Galicia, Spain. There I started experimenting with animation. It was technically quite messy at the time, but I loved the narrative, artistic and colourful potential. It was only when I moved to London that I learnt formally how to animate. The first time I saw my drawings come to life, was really amazing. So I decided to keep doing it.

I graduated last year from a Master in Animation Direction at the National Film & Television School with a short called Jamón. It’s traditionally animated, ink on paper with hand made screen-printed backgrounds. I now live in East London.

I am not sure how it happened, I guess through experimenting. I like messing around with techniques and ideas. But I guess my favorite method implies drawing a lot and designing, no matter what medium either digital or by hand.

I get inspired by everyday life stories. Once I know what I want to do, I do a lot of research on the Internet, books, magazines… Then I create a sort of virtual mood board, then I do thumbnails and a storyboard, an animatic, designs, and then I plan the animation. Sometimes I change things around, but only when I realize that there is a shorter and better way of telling the story.

I have my own studio in Clapton, it is my messy playground, very comfortable to work in, thankfully because I spend far too much time in it!

From a young age I knew I wanted to draw lots of characters and so animation and illustration always seemed a good route to go down! I studied at Dundee University where I gained a BA and MA in Design for Animation, which then led to working as a character designer and animator on various projects for TV.  Designing for Ragdoll Ltd and becoming Art Director on the BAFTA winning ‘Amazing Adrenalini Brothers’ were both highlights of this period.

I am very excited to be working with Picasso Pictures where I have been an animator for a number of years, and to now be a director here is amazing – it’s a wonderful team here. I am based in Soho, London where I split my time between my own studio and Picasso.

My style was quite different a number of years ago, but now that I also illustrate children’s books I have found that this has helped me focus on my own voice and to adapt and hone my style for animation – the two mediums work very happily together.

I always start with a thumbnail storyboard as a good basis for discussion. Then my favourite part of any project, once an idea or brief has been set is the character design – loose pencil sketches are always a joy to create and form the basis of all my work.  I then move on to digital colour where further tweaks and perfections of each character take place.  Translating these characters into an animated, living breathing character is where the real thrill lies – it’s infinitely exciting to see one of your creations come to life.

So we met at Supinfocom, a University in France specialising in directing, where we studied for five years in the same class. Working closely with each other for so many years created a bond.  After graduating we both (separately) decided to go to the UK as we had many work opportunities there, and by chance ended up working in the same production company in London (Picasso Pictures) as freelancers, on various creative projects! In the end Picasso Pictures offered us the opportunity to team up to bring our creative talent together as directors.

We’ve always been big fans of animation movies whether 2D, 3D or VFX Hollywood movies. We usually express ourselves through CGI, but enjoy working with a pen and paper as well. We also have a traditional art background, which has given us a broad artistic knowledge, both in fine art and cinema.

Most of the time we start on concept art, forming a solid design, texture development and script. Then comes the storyboard and 3D animatic where the shots are defined and polished, bringing together the story, the montage and the sound. Then comes the production phase, including modelling, animation and rendering. Finally the post production phase allows us to refine the images and sound. This process is a bit like building a house, starting with the foundation to give a solid base to build upon.